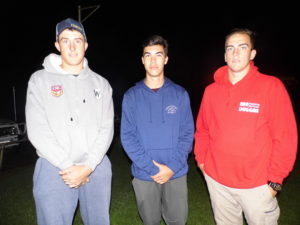 Three of our young local rugby league players, Mitchell Andrews, Matt Nicholson and Charlie Staines, were selected into NSW Country Representative teams after playing= in the grand finals of the AAMI Country Championships in Tamworth on the weekend. Mitchell Andrews, along with five of his Western Rams U/18’s team mates were selected in the NSW U/18’s Country side that will compete in Perth later in the year in a curtain raiser to the Manly v’s Warriors clash. The U/18 Western Rams had success in the lead up to the grand final under the watchful eye of local coach, Cameron Greenhalgh, but were unable to overcome the strength of the Bidgee Bulls on the day. The U/16 Western Rams had a closer finish against the Greater Northern Tigers, tied at 12 all with just 20 seconds to go the
Tigers scored to take claim the trophy. The loss in the grand final did not deter selectors from naming six of the Rams in the NSW U/16’s Country Team including two of Forbes’ own, Matt Nicholson and Charlie Staines.

Both players and their families were elated with their selections and excited at the prospect of being coached by former NRL player, Andrew Ryan, before travelling to Samoa in October. Both boys have schoolboy representative commitments at Red Bend Catholic College for Matt and Forbes High School for Charlie along with club commitments at Red Bend Junior Rugby League and Forbes Magpies Junior Rugby League that they will coordinate with the extra representative schedule. Matt has also signed with St George for 2017 and will continue to put in the hard yards with the hope of turning his passion into a career.