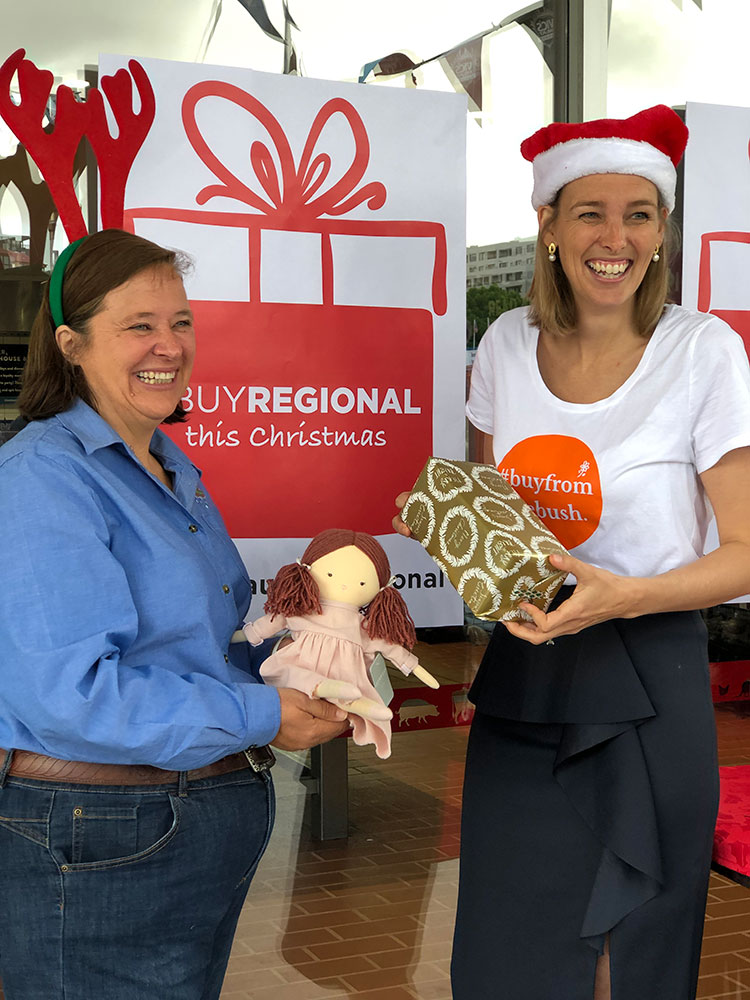 Cassandra McLaren (One Day Closer to Rain) & Grace Brennan at the launch of the Buy Regional campaign.

The devastating impact of the drought in rural Australia has prompted several initiatives to see the light over the last month in support of country town businesses and entrepreneurs.

Go Country for Christmas was launched last week to encourage fellow Australians to support rural and regional communities by purchasing their Christmas presents from a business based in the country.

A new social media campaign called #buyfromthebush has also been started. It targets people in the city, encouraging them to buy from regional areas in the lead up to Christmas.

Liberal Senator for NSW, Hollie Hughes, encouraged Australians to think outside the box when buying presents this Christmas at the launch of Go Country for Christmas. “We don’t need to buy from the usual suspects, just go to gocountryforchristmas. com.au and get the same thing you had in mind but buy it from a small regional business,” she said.

The website gives consumers an easy and accessible directory enabling them to buy Christmas presents from a registered country business.

Businesses that have an online presence and haven’t yet registered on the website, can go to www.gocountryforchristmas.com.au. Consumers and retailers taking part in Go Country for Christmas, can use the #gocountryforchristmas on your social media accounts to spread the word.

Grace Brennan, who started #buyfromthebush, never expected the campaign to take off the way it has. She told the ABC some business owners said they were already reaping the benefits, as the campaign has gathered more than 20,000 followers on Instagram.

Grace created #buyfromthebush to shine a light on drought-affected towns struggling to maintain their businesses. “Small businesses in the region depend on money coming from the agricultural industry, which is diminishing in the drought,” she said.

Grace saw this as an opportunity to draw in new customers using social media. “It’s incredible what you can do with Instagram and Facebook.”