You are here: Home / Sports / Regan Courts Victory In Rockhampton 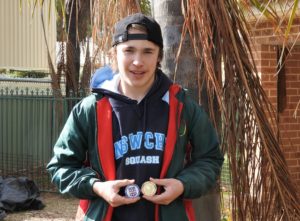 Local 17-year-old Regan Acret has been selected as part of the NSW Combined High Schools team to compete in the Trans- Tasman Squash series competition in Rockhampton later this month. Regan took up squash in mid-2014 after heading to the local courts to watch a neighbour play. He thought it looked like fun. “I decided to start having a hit, and really started enjoying it, so I thought I’d see if I
could get into it more seriously,” said Regan.

Regan discovered the local club competition, and began playing on Wednesday nights, learning the basics from Ken Comrie. He learned quickly, and was runner up in the under 15’s A-Grade in his first competition in Dubbo in 2015. Regan won the C-Grade competition in a
junior tournament in Bathurst in 2015, then won the B-Grade open competition in the same location in 2016.

He was then selected for the Combined High Schools Western Region Team, and competed with them in Sydney last June. The team came third, but Regan was the competition’s individual runner up, and was awarded the competition’s Best and Fairest medal, nominated by his fellow competitors. Selectors naturally snapped him up for the NSWCHS State team that will compete against players from Queensland and New Zealand from 21-24 August.

Regan’s mum is proud, and grateful to the people involved in helping Regan.. “I’m very proud of him with his outstanding determination, commitment to, and passion for the game,” she said. “I’d like to thank Forbes Squash Club, Murray Reid, and coach Aaron Moulds, for their support.”