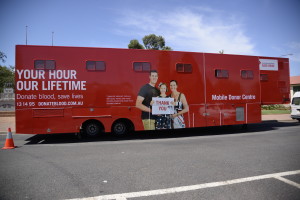 The Red Cross Blood Service Mobile Unit was in Forbes during the week as part of a campaign to attract more donors. The Blood Service launched their year long campaign at Forbes’ Victoria Park, in an effort to try to attract an additional 115,000 new blood donors during 2016.

The service says it needs to bolster its donor ranks to help combat seasonal donor shortages around long-weekends and cold and flu outbreaks throughout the year.

It also states an estimated nine million Australians are eligible to give blood but only 500,000 actively do so, which is why it is reaching out to those who have never donated before.

The Service’s Mobile Unit was in Forbes between 9:40am and 2:50pm each day between Monday and Thursday this week, with residents lining up to donate their blood.

Blood Service spokesperson Erin Lagoudakis said it hoped the other 8.5 million Australians they estimate could give their blood would jump on board and help out. “Blood donation has been a proud Australian tradition for 87 years and was born out of a need for lifesaving transfusions,” Ms Lagoudakis said.

“The delivery of blood was time critical, and despite many advances that is still the case today, with some critical components unable to be stored longer than one week. “Because there are times when donor numbers are traditionally low, such as long-weekends and cold and flu outbreaks, we need additional donors to come on board between now and the end of the year to continue helping the one in three Australians who will need donated blood in their lifetime.”

Ms Lagoudakis said common tragedies such as cancer diagnoses, road trauma
and blood loss during childbirth were among the regular uses of blood.
“To ensure blood is there when you or a love one needs it, we need more people to sign-up as blood donors. “If more people give blood, then it’s more
likely to be there when you or a loved one needs it later.”