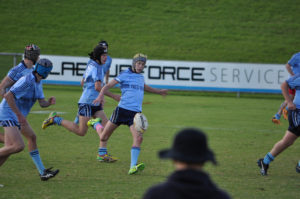 Both Red Bend Catholic College Opens and Fifteens teams had convincing wins recently in the Western Final of the Country Cup. The opens had a big 40-4 win over St Johns. Always in control they showed some great combinations in attack and defence.

The Man of the Match was the versatile Jye Dillon who started in the centres and ended up in the front row. The Fifteens scored the first try, however St Johns (Dubbo) fought back strongly, with the College leading 10-6 at half time.

The second half saw the Red Bend team show some great teamwork in scoring four great tries to eventually run out winners 30-6. The Man of the Match was
half back Thomas Toohey. The College has a proud history in the Country Cup winning the Opens and Under Thirteens age division twice previously, while the Opens were runners-up in the final last year. The teams now travel to Cootamundra next term on the 28th of July for the Southern Finals, where they will play the winners from the Riverina, Wollongong, Canberra and South Coast regions.

The Country Cup is run by the Country Rugby League (CRL) and the NRL. It is an All Schools Event for Country Schools (State Catholic Private) that is contested in three age divisions under 13’s and 15’s, and Opens Schools
attend regional gala days with the winners progressing through to regional finals. Winners of the region then progress through to play in the Southern or Northern Finals from here the Southern and Northern winners play the State Final.