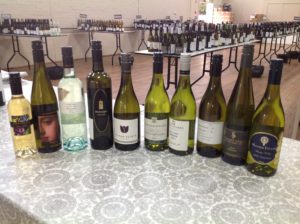 Judging at the 25th Annual NSW Small Winemakers Wine Show concluded on Wednesday afternoon with judges commenting on the high quality of the wine exhibited. This resulted in a higher than normal number of medals being awarded.

Of the 550 wines entered, a total of 290 medals were awarded, consisting of 34
gold, 53 silver and 203 bronze. That’s a 52.5% strike rate, which is one of the highest over the past shows. The Best White Wine of Show went to Coolangatta Estate 2009 Wollstonecraft Semillon. The Best Red Wine of Show went to Horner Wines 2015 Cabernet Sauvignon.

Wines from Orange, Young, Griffith and Canberra did very well this year. There are medal winning wines in all the varieties on show, so there should be wines to suit everyone’s preferred style. All of the wines exhibited will be available at the public tasting on Friday night from 6.30pm at the Forbes Youth & Community Centre. Tickets are $25 per head and are available at the door.