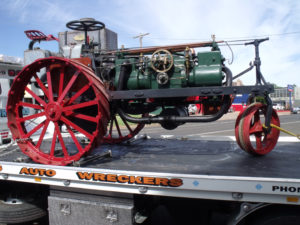 If you have a passion for antique machines Forbes will have to be on your bucket list as one of only seven Ivel tractors left in the world is now part of the Forbes and District Historical Society Museum.

The 114-year-old Ivel tractor is regarded as the first successful agricultural tractor, being the first machine made that was able to replace horses.

It took 18 months to restore the Forbes Ivel tractor, belonging to the Forbes Histo- rial Society, at a cost of $18,000.

Museum President Bruce Adams said the group was extremely proud to have re- stored a rare and historic Ivel tractor. The tractor was used in Gooloogong as a pump engine until the 1950’s, but came to the museum in disrepair.

“A lot of the parts, including all the brass bits, had been stolen off it and sold. We had to dismantle it completely,” Bruce said. “We had parts made locally and some in the UK, and it’s all in running order again, you can drive it around.”

The Forbes Ivel is on display in a custom-made glass cabinet at the Forbes and District Historical Society Museum.