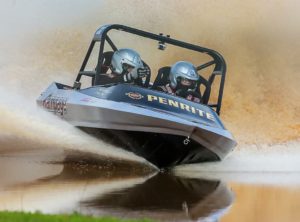 Last weekend saw locals Justin and Mitch Roylance compete at Round 3 of the Australian V8 Superboat Championship in Temora in the Group A 400 class. Qualifying seen Mitch and navigator Matt Hearn in Blackjack at the top end of the field, after taking out 1st place at the previous meeting in April, they had the rest of the field
on their toes. Unfortunately Justin and his co pilot, Joel Duggan, B driving the Rampage boat had engine issues and found themselves at the bottom of the field in the Qualifying rounds.

Coming into eliminations Team Rampage found time to make a few changes to the engine, without any testing opportunity they were able to put down a good enough time to go through to the next round. Team Blackjack also laid down a blistering time allowing them to proceed. The next round of eliminations comprised of 6 teams which were 2 Obsessed (Brett Thornton), Rampage (Justin), Jack Hammer (David Moodie), Pangaea Floors Racing (Greg Harriman), Black Jack (Mitch Roylance) and the A Driver in Rampage (Jody Ely) these 6 battled it out to gain place in the top 3.

The unlimited class was taken out by crowd favourite Phonsy Mullan in “Ramjet”, 2nd place was Darek Sygidus in”Frankenstein” and 3rd was Daryl “Nutsy” Hutton in “Hooters”. There has been fantastic local support for this sport and the teams. August and September sees racing head North to Cabarita Beach and back at Temora on the 1st & 29th October.

If you would like to know more about the V8 Superboat Championship, check out the teams on Facebook. www.v8superboats.com.au