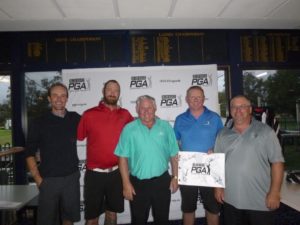 Professional golf returned to Forbes last Friday, its first appearance since the late 60s and early 70s, and it proved to be an outstanding success. Playing in the E-Z-Go Legends Pro- Am, David Merriman from Royal Pines in Queensland and formally from Boorowa, came out winner with 6-under par 66.

The professional tournament, for players aged 55 years and over, also included amateurs from across the district resulting in a full field of 120 plus with play from 8.30am to 10.30am on the 1st and 10th tees. Like all players Merriman was highly impressed with the Forbes course. “What the club here has put on is excellent, the course is a credit to the outdoor staff and volunteers who help out,” he said. “The speed of the greens which have a good cover of grass really impressed me, they were excellent and putts kept their line. I can see this tournament growing in years to come,” he added.

Runner-up with 3-under par 69 was Peter Woodward from Berwick, Victoria. Third was touring professional Glenn Joyner from Melbourne while fourth place was shared by local amateur Steve Betland and Allan May from Thornleigh, NSW. With a total purse of $11,000, Betland would have picked up a cheque of $625.24 if eligible.

Betland wasn’t the only local player to collect a trophy with several others taking home spoils in A, B and C grades plus Ladies. Forbes golfing ladies continued the trend of major events, staging their Open Tournament last weekend with Duntryleague Orange member Susan Fenwick winning the individual competition on Sunday with a score of 83 in Division 1.