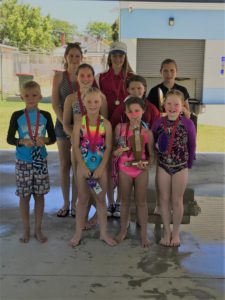 THE PRIZE WINNERS… Pictured at the back (L-R) are Prue Baker, Katie Townsend and Laura Pritchett. In the middle are Ellie Glasson and Scartlett Francis, and in front are Stirling Francis, Brooke Kelly, Indigo Francis and Regan Molloy.

The Forbes Pony Club celebrated its success in 2016 on Sunday. Club President, Lisa Glasson said it was a very successful year with four member representing NSW: Katie Townsend for show jumping; Lizzie Wythes and Brooke Kelly for show riding and Ellie Glasson for combined train- ing. The club also hosted a two-day Gym- khana, while the Zone Gymkhana was hosted in Forbes where almost 60 riders from the Central West competed. You can register as a rider, volunteer or member at the Forbes Pony Club Grounds, Forester Street on Sunday at 9am.