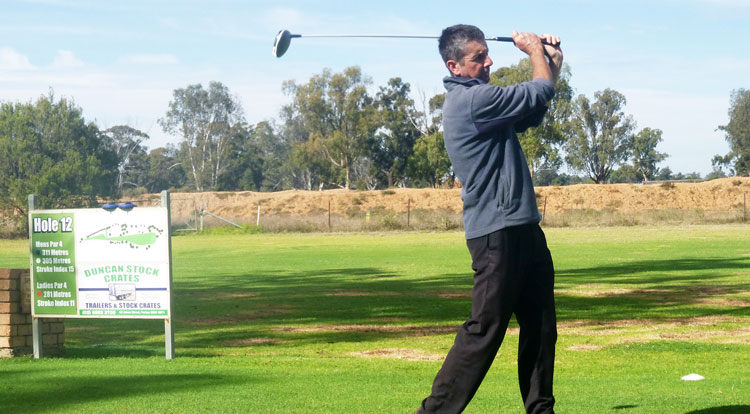 BOOM: George Falvey of Forbes launches one off the tee at Forbes Golf Club.

In cool autumnal weather 164 players competed in the Forbes Men’s Open, with the winner earning an entry into the 2022 NSW Open. This year’s event was sponsored by Forbes Shire, Golfie Hotel and Golf Harvest. At the end of the day four players finished on 2-under, requiring a play-off to decide the winner.

The A-Grade scratch winner, and winner of the Forbes Open, was Thomas Heaton (The Australian GC). Thomas scored a birdie on the second play-off hole, the par-5 2nd hole, to push Joshua Gadd (Penrith) into the Runner-up position.

On the first play-off hole, Will Moody (Avondale) and Joseph Curran (Moore Park) each made bogey to end their tilt at the title.

The C-Grade results were: Scratch win-ner A Richards (Condobolin) with 86 ahead of N Ryan (Forbes) on 91. The Handicap winner was J Wood (68 nett) ahead of A Quirk) 70 nett, and again both from Forbes.

On Saturday a 4BBB Stableford was played, sponsored by Forbes Livestock & Agency. The field of 116 managed to produce some very good results.

The Scratch winners were Penrith players M Organ and J Gadd with 41 points. Scratch Runners-up were local players J Betland & P Dawson with 40 points. The Handicap winners were D Bayley and A Quirk (both Forbes) with 43 points, on count back from G Webb (Forbes) & L Cotterill (Brisbane) with 43 points.

This weekend has an 18-Hole Stable-ford, with the West Wyalong Mens Open, the second event in the Trilogy of Golf’, on Sunday 23 May.