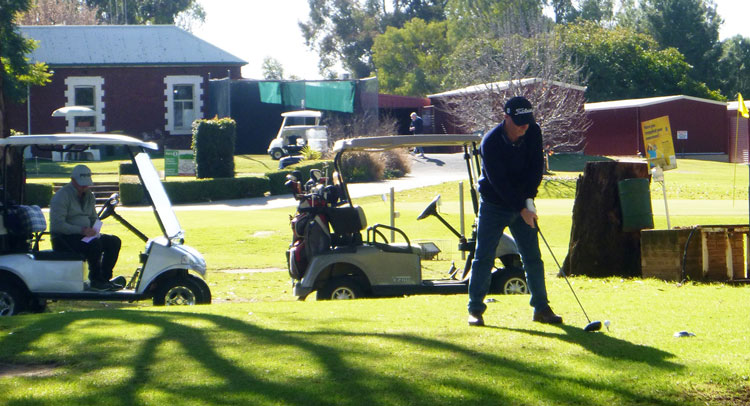 SMACK: Scott Kirkman about to launch off the tee in the shadows of the morning chill.

Saturday’s comp was the Monthly Medal, sponsored by the BWR Accountants & Ad-visors, with 67 players doing their best to win. The leaders showed a welcome return to form to claim victory.

The A-Grade was won by Dan Bayley (67 nett), finishing well ahead of runner-up Ja-cob Bernardi (71 nett). Dan was under par on the back-9, while Jacob struggled after a good front-9.

The B-Grade was won by Paul Kay (68 nett) in a close finish ahead of Greg Webb (69 nett). Greg came off the back of a good win at Condobolin, but Paul showed his true determination and grit to win after recent weeks of indifferent form. The C-Grade was also close with Tom Toohey (69 nett) nudging Frank Hanns (70 nett) into runner-up. Tom’s front-9 set him up well.

The ball sweep went to 75 nett on count back, so please check in the Pro Shop. The NTP’s went to: 9th – B Chandler, 18th – T Griffiths. The 3rd hole Super Pin went to Glendon Hooper, whose early shot in the day set the target but was never beaten.

There were no visitors, and only a handful of 2’s were scored with most on the 18th.

There was no Sunday Stableford Medley, with players resting after a marathon period of golf.

Numbers can still be entered for the Can-Assist Ambrose Medley. And players are reminded of the LVDGA Championship and Pennants being played at Parkes on 20 June. This comprises an Individual Stroke and Handicap Event with registered teams for the Pennants.

Also on the calendar are the Mens Foursome Championships, played over 36 holes and scheduled for 26 and 27 June. Choose your partner well.

Saturday 12 June is an 18-Hole Ambrose Medley with proceeds going to Can-Assist. Sunday and Monday have Stableford Medleys.