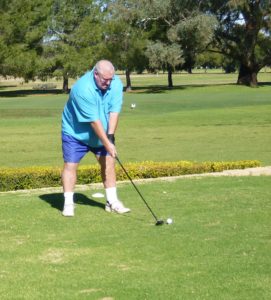 Last Saturday’s Individual Stableford was won by Paul Kay in the A-division with the Wilf Hodges Memorial Trophy up for grabs.

Paul was very focused to record 42 points, which earned him the trophy. Run- ner-up was Tim West, who had a disaster on the 2nd hole, but managed to score points on every hole thereafter, finishing with 39 points. The B-division saw Milton Cartwright take the honours with 39 points. Only two points back was Gus Coles with 37.

The field for Sunday’s Stableford Medley was small, and the scores low. The winner was Ethel Coombs with 34 points, win- ning on count back from Bruce Carpenter. There was no ball sweep. The NTP’s went to: 9th – S Kirkman, 18th – Ray Taylor.

A large group of Forbes players attended the West Wyalong Open on Sunday with Steve Betland the eventual winner, scoring 74 scratch to finish one better than a local player. The Forbes guys also picked up an NTP and a handicap award.