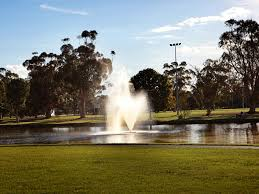 Nelson Park will soon boast enhanced amenities with the construction of a toilet block expected to be complete by Christmas. Mayor of the Forbes Shire Graeme Miller said he is delighted to see the project coming to fruition.

“Council has invested heavily to make Nelson Park a modern, inviting and family friendly facility in the north end of town,” he said.

The park has been a focus for Forbes Shire Council over a number of years. Two years ago Council constructed play equipment including swings, a fireman’s pole, net rope play system, a large pyramid climbing frame, rotational see-saw, slides and more. “In 2015 we installed the brand new playground and we have been delighted to see families flock to the park since that time.”

However Graeme said the additional amenities complete the picture. “It was identified that the area was in serious need of an amenities block. Not only is the park heavily utilised by families, it’s also a major thoroughfare for residents walking from the north of Forbes to the CBD.”

Funding for the project has been provided by Forbes Shire Council together with the Department of Family and Community Service’s Social Housing Community Improvement Fund. In total the department will contribute $50,000 toward the $105,000 project cost.

Once complete the amenities block will include three toilets, a baby change station and solar lighting. The toilet block will be closed at night. “We hope these upgrades further enhance what is already a top quality community facility,” Graeme said.