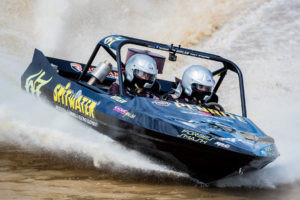 The Outlaw Team Spitwater from Forbes made its public debut in the Australian V8 Superboats in front of more than 10,000 fans in regional South Australia last month.

For Justin Roylance and his team, the event was their first real opportunity to debut their all-new Outlaw Team Spitwater package, which had been developed by two young V8 Superboat talents from JRE Race Engines.

“Our aim was to put the boat back on the trailer every run, and we achieved that.” Despite qualifying sixth fastest, Justin missed the cut for the second final after an electrical gremlin put paid to their chanc- es of making the podium. We’ll take away what we learnt and come back at Griffith over Easter looking for a podium.”

Like the Keith event in South Australia, Griffith is arguably the toughest V8 Super- boat challenge of the year.