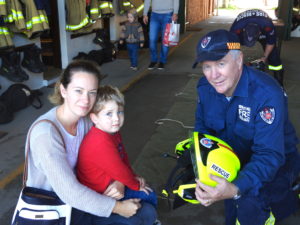 At the Forbes Fire Station’s annual open day last Saturday, local fire officers aimed to raise awareness and educate residents about the dangers of fires in the home, and how to prevent them.

“We always hold the open day in May. It’s an opportune time coming into the winter months to remind people about the danger of fire,” said Station Captain Brian Clarke.

While kids enjoyed their plastic fire fighter hats and exploring the big red engines, Bri- an and some of his crew members handed out wooden spoons etched with the phrase, “Keep looking when cooking”.

They want to remind people not to walk away from the stove while preparing meals. “In the last six months, we’ve had four

calls to fires started because food was left cooking on the stove unattended.

“A woman forgot she had tea on and decided to go to her daughter’s house at the other end of town. Luckily the neighbour heard the smoke alarm and called the fire brigade. Fortunately only the food, the saucepan and the top of the stove burnt, and it created a lot of smoke right through the unit.”

Brian has a strong message for the community: “Don’t leave anything cooking on the stove unattended. Don’t put clothes next to heaters. And everyone should have at least two smoke alarms in working order in their house, if not more.”

When there is an incident, however, the Fire Brigade is quick to attend. “The Fire Brigade’s Act requires that response times are no longer than 10 minutes. The average time from call to response for the Forbes crew is seven minutes,” Brian said.

The Station has a manned crew of 15 fire fighters. They all have other full-time jobs but are retained by Fire and Rescue NSW to cover the local community.

Under the Brigades’ Act, four of those fire fighters must be avail- able 24 hours a day, seven days a week, to respond to local inci- dents. But sometimes, no matter how quickly they get there, there isn’t much they can do.

“We had a house fire where the house was completely destroyed a few months ago. Someone left a newly renovated home with a candle burning on the bedside table. The window was open and the wind blew the curtain into the candle. They lost everything.”

Brian has been involved with the local Fire Brigade for 39 years. Last month, he attended government house to receive the Austral- ian Fire Service medal, a Queen’s medal, which was awarded to him on Australia Day. He described the award as “a great privi- lege”.

Next year, the Fire Station will celebrate its 90th birthday. Built in 1928, it has recently been refurbished to give the fire fighters more room and better facilities.

Up until October last year, the original fireman’s quarters upstairs were leased for private occupation. The top floor has been trans- formed and now offers a more comfortable working environment.

The open day will be held again next May as one of many state- wide events run under Fire and Rescue NSW.