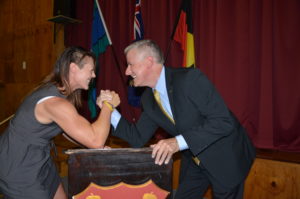 Australia won the first ever gold medal awarded in women’s rugby sevens after beating New Zealand 24-17 at the Rio Games this week. Two of the players, Alicia Quirk and Sharni Williams, are from the Riverina. Federal Member for Riverina, Michael McCormack, congratulated the team and the two local players on their gold medal success.

He said he was delighted to know both girls personally. “Alicia and Sharni are very inspiring people and fantastic role models for young athletes in the Riverina and elsewhere,” Michael said. Alicia was Kildare Catholic College’s school caption in 2009. “Sharni once beat me in an arm wrestle at a presentation night at her old school – Batlow Technology High – although some would say that is not a difficult feat!”

Michael was pleased to give the two sportswomen their first national media shout-out on Sky News just moments after their success on Tuesday morning. “It’s always great to give the Riverina and its many talented people a plug in the national media,” Michael said.