Home » Now That Is AMAZING! 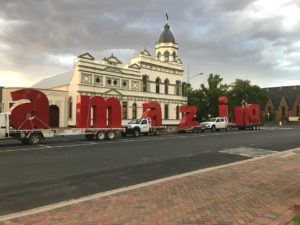 “It is hard to believe AMAZING is actually here.”

This is what designer, Rosie Johnston told the Forbes Phoenix after the installation of the AMAZING sculpture last week. “It feels like the other day when I first spoke with Ian Bartholomaeus from Midpro Engineering. Ian was enthusiastic right from the start and never doubted the project wouldn’t be achieved.”

Rosie described the process of the design and building of the sculpture comparable to the lyrics of Australian musician Paul Kelly: “From little things big things grow.”

“I was inspired to create a sculpture to contrast with the ever changing beauty of Central West NSW and now the sculpture, made with eight tonnes of steel, has been erected in its resting place!” said Rosie.

Keith Mullette, president of the Forbes Art Society and one of the project partners said: “It has been an extraordinary project.” The total value of AMAZING is estimated to be more than $150,000, however in cash terms it cost only $6,000.

Rosie attributes the low cost and successful completion of the project to the hard work and dedication of the Forbes and surrounding communities and farmers, as well as the tradespeople. “I want to thank everyone who has been involved very much,” said Rosie. She also personally thanked Kim Muffet, owner of Girra Girra, who was the Project Manager.

AMAZING is located on the stock route alongside the Lachlan Valley Way, 18 km from Forbes and is the first of up to 14 sculptures to be installed. One of the main aims of the sculpture trail is to assist the Central West to diversify its predominantly rural economy. And with dining experiences, dance and musical performances to be organised, visitors to Central West NSW won’t be able to resist staying a little longer.