Home » Not Just Raffles and Barbeques 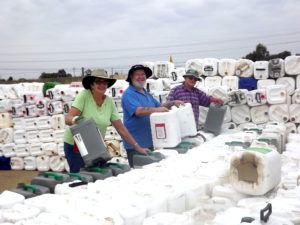 The Forbes and District Lions Club assisted almost 50 flood stricken families since October last year from an office at the Forbes HACC Centre.

Although the office has been closed since Tuesday due to a decline in demand, help will still be available. “We have not stopped the relief programme. Funds are still avail- able to local farmers,” said Peter Bright of the Lions Club.

The club helped 47 families with a variety of Australian Lions Foundation vouchers including food, fuel, stock feed and fencing, redeemable at Forbes businesses so the benefits have flowed to businesses and farmers.

Anyone requiring assistance with fencing or stock feed vouchers in future should call 0419 463 803. There is also a Government Grant available to local farmers, and applications close at the end of June.

“We would like to thank all the people who have assisted us with funding, in particular Brad and Jenny Shephard, the Forbes Shire Council, and in particular Blake Nicholson for all the help he has given in set- ting up the programme,” said Peter.

He encouraged Forbes residents to join the Lions Club saying: “We are not just about running barbeques and raffles, but a wide variety of programmes.