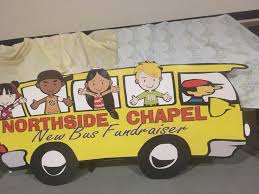 It all started in 2007 when Rev Lynn Bullard of the Anglican Church, while attending a conference in Sydney, mentioned that the church in Forbes had just started an outreach for children. Ray and Di Flint heard this and expressed an interest in assisting with the ministry.

After training with the Church Army, Captain Ray took on the leadership of Church in the Schoolyard in 2008. The outreach was grateful for the use of the Forbes North School grounds and the involvement of volunteer helpers from many of the churches in Forbes.

Students from the TAFE cooking class provided hot meals and the Uniting Church provided sandwiches for lunch for one Sunday per month. Weekly Wednesday night gatherings also commenced and were guided by Ray and Di.

In 2010, Forbes Shire Council offered the use of the disused Guide Hall in Johnson Street for the ministry at a nominal rent and provided fencing for the block. Local tradesmen and volunteers worked alongside Ray doing up the hall and fitting the kitchen and the old hall which is now very functional and well used each week.

The Church in the Schoolyard is now known as Northside Chapel and is jointly funded by the Anglican and Uniting Churches with donations from other churches and local people.

In 2015, Ray and Di retired and the Northside Chapel ministry was continued by Rex and Rachel Taylor.

The Northside Chapel brings games and Bible stories to young people in the area. Rex collects the young people each week from their homes by bus, every second Sunday in the month and every Wednesday, and they are returned home afterwards.

The gathering is growing and the aging bus, which is now too small and has outlived its usefulness, needs to be replaced with a bigger bus.

To raise funds for the bigger bus the Chapel committee have decided on a sheep drive and are asking producers to give a lamb or sheep on sale day, the 10th April. Contact Ian Thomas for further information on 6851 4350 or visit “Greenbank” 8461 Lachlan Valley Way, Forbes.