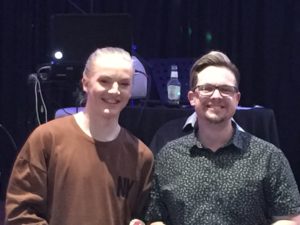 Just when you think you’ve seen the best Forbes has to offer, we manage to showcase even more talent! Forbes local, Matt Prow was named open division winner after wowing the adjudicators of the Forbes Karaoke & Talent Quest hosted by the Forbes Services Memorial Club last Friday.

Matt and 14 other finalists from three categories selected during heats held over the previous two Fridays, had to perform three songs during the Grand Final.

Matt’s impressive vocals and equally impressive dance moves made him a crowd favourite and sealed the deal for a win.

He also walked away with $600 from the $1,500 prize money that was up for grabs. Trina Dolan took second place and Lily Adele Gaffaney came third.

Event organisers and professional performers, Bill Kosseris and Kirsten Minnick from Kosmik Country said: “Congratulations to not only the winners but to all of the entrants! The talent continues to amaze us and it is a great pleasure to provide this event on behalf of the Forbes Services Memorial Club and management.

“Obviously with such great entrants and patronage we will be able to make this an ongoing event. We have come to see the enormous talent and improved performances grow from competition to competition. If we can encourage the talent to shine as we know we can do then our connection with this event is very fulfilling indeed,” said Bill and Kirsten.

Other locals among the finalist were Katelin Small, Jade McGovern, Ryan Hennock and Luther Crawley.