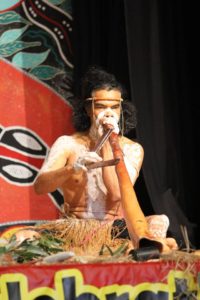 “Forbes has many outstanding Indigenous residents and this is a chance for the community to see they receive the recognition they deserve,” Mayor Graeme Miller said.

The awards are part of NAIDOC celebrations, but while the national week runs in early July, Council will hold a local event on August 24 to ensure more people can participate.

“NAIDOC Week falls during school holidays. Having our celebrations later means we can get more of our young people involved, and hopefully the weather will be a little kinder,” Mayor Miller said.

The celebrations will feature a march, performances from local schools, and a community barbecue. World class Indigenous performers, Koomurri, will also perform.

“Koomurri have performed at the AFL and NRL Indigenous rounds, the Rugby World Cup, and the Sydney and Athens Olympics. More recently they’ve performed at the Adelaide Fringe Festival and we’re delighted to welcome them to Forbes,” Mayor Miller said.