Home » No Maybe Baby About KMS 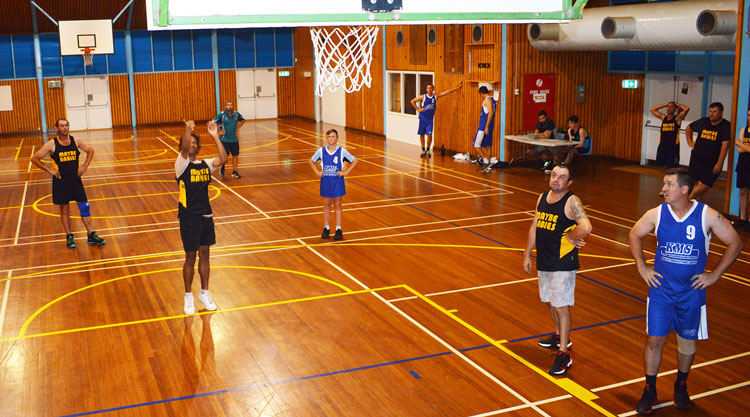 FREE THROW: Players from Maybe Babies and KMS watch on as the ball hits the rim in their clash last week.

It was billed as the game between the defending champs and the team that would-be king – Misfits v Flint Tropics. In the end, the win for Flint Tropics 40-28, who like, Misfits, were undefeated going into this game, has only raised more questions than it answered.

Lead admirably by Jono Merrell and Justin Hoy, Flint Tropics immediately went to work coming hard out of the gates and making life difficult for the champions whose attack was disjointed.

“Our D kept us in it,” said Shannon Crowley of Misfits.

“We just couldn’t get anything going on offence despite tremendous efforts from new recruit Morgan Ball and Grant King in the paint,” he said.

“In the end they were too good on the night even though we closed the gap to single digits towards the end.”

“We have a lot of improving to do to beat Flint Tropics let alone go back-to-back,” said Crowley.

“I know we can improve our attack and we have some time to get that right,” Shannon said. “We will need to if we are a chance.”

In the battle of the cellar dwellers, KMS, lead by its young stars, outpaced new side Maybe Babies 68-28. Despite strong games from Adam Maynard and Mark Stirling, it wasn’t enough for Maybe Babies to combat the chemistry of KMS who’s three-point shooting alone blew the contest wide open. Maybe Babies captain Mark Stirling though, remained upbeat the side can improve and remain competitive.

“It’s only our first season but we have to continue to work and hopefully that translates to some wins.”