Home » Nic To Ride For His Country In Spain 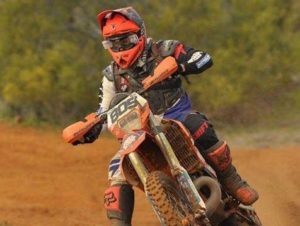 At just 19 Forbes local Nic Tomlinson has allowed his consistent results to speak for themselves by being selected to represent Australia at the 2016 International Six Day Enduro (ISDE) event to be held in Spain later this year.

Nic submitted an expression of interest for the event, which was accepted from a pool of highly accomplished applicants. “I was really excited by the news that my application was successful,” he said.

The 2016 event is to be held at the Circuito de Navarra in Spain with 22 countries taking part in the Junior Trophy category. The ISDE will run from 6th to 17th October. Races commence on a Tuesday in order to finish on Sunday. Riders have to complete one and half laps a day, which will take them over seven hours. There are five special stages by day with two different itineraries and two service time checks out of the Paddock. Teams are allocated just ten minutes per day to change two tyres and make any modification to their bikes for the next day of racing.

Navarra borders France and has a diverse terrain with the Pyrenees Mountain range, forested mountains, well-watered valleys, basins, hills and arid regions. “I really don’t know what the course will be like,” Nic said. “I am guessing it will be hard.”

Nic’s greatest supporter, his father Gary, will be accompanying him to Spain as part of his team. Nic will continue to compete in events within Australia until his adventure starts in late September.

The history of the off road motorbike began in 1913 and has lasted until today as the ISDE. In 1985 the Junior Trophy came into effect, exclusively for riders up to the age of 23, and the Women’s Trophy started in 2007 extending the teams eligible for the event.