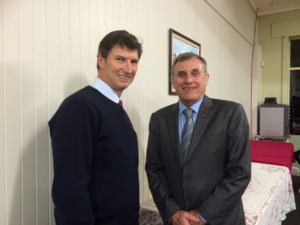 The new President of the Forbes Business Chamber is Chris Roylance. Chris, who is the Managing Director of Roylance’s Auto One, is taking over from Stuart Thomas who has stepped down after three years as President. Stuart is staying on as a member of the committee.

Chris said one of the main goals of the Chamber would be to promote Forbes as a major regional retail hub in country NSW. Sitting in the President’s chair for a third time, Chris would also like his committee and members to work towards promoting Forbes industry, growing employment opportunities and developing a better retail shopping environment for all customers.

Other goals are to promote and develop more tourism and promote products grown or manufactured in Forbes. “All of this is to be achieved by Forbes businesses working in conjunction with a new and hopefully invigorated Forbes Shire Council,” said Chris. “Forbes businesses have a challenging time ahead but with new technology and improved business practices we will move back to being a major force in country NSW.”

A full committee of ten members was elected at the AGM last week. “We feel this is a great mix of people and we look forward to a continued successful working committee,” said the President. The committee members are Chris Roylance (President), Marg Duggan (Senior Vice President), Stuart Thomas (Past President), Gabe McMillan (Secretary), Kimberly Chudleigh (Treasurer), the Executive: Stevie-leigh Morrison, Jason Hopkins, Ian Bown, Brett Rout and Ben MacKay, and Jill-Ann Borger (Administration). One of the highlights on the Forbes Business Chamber calendar is The Boscars gala event in October. There is an enthusiastic sub committee working hard at the moment to make the event a success.

The Christmas Festival sub committee is also very busy nutting out ideas, making arrangements and setting a date for this year. More details will be announced soon.