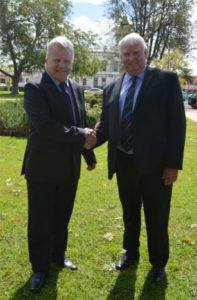 Forbes has a new Mayor after Councillor Graeme Miller was elected at the first meeting of the newly elected Council last Thursday. Former Mayor, Councillor Phyllis Miller, who was the first person elected to the council, contested the position. There were also two nominations for the position of Deputy Mayor with Councillor Grant Clifton winning the vote over Councillor Jeff Nicholson.

“This is a great privilege which I will treat with 100% respect,” said Councillor Miller after his election. Councillor Clifton said he was humbled to be in the position as he had not been on the Council very long. “I appreciate all
the support and will do my bit to support Graeme.”