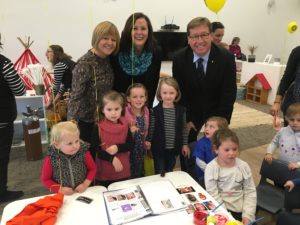 It has been a rollercoaster ride over the last four years, but the new Forbes Preschool was finally officially opened last Friday. Centre Director Amy Shine was joined by NSW Deputy Premier Troy Grant and Forbes Mayor Phyllis Miller, as well as many other children and parents, to celebrate the occasion.

The project was funded by the preschool itself, Forbes Shire Council and the State Government, with the State Government contributing a grant of $1.25million to make the project possible. The new building has been in use for the last seven weeks now, but its completion had been delayed for four years.

The new building was originally going to be built on the other side of Nelson Park to which the new building stands, but following a community consultation at the time, it was decided the plans would be changed. Some time after this occurred, the former tennis courts on the opposite side of Nelson Park became available, and they ultimately got approved to make way for the new preschool.

The new building, located on Barton Street, just down the road from the location of the old preschool on Bogan Street, is a far cry compared with the old facility according to Ms Shine. “It really is a dream come true,” she said. “Before this new facility was built we had a massive waiting list for children enrolling at the centre, and we were struggling to keep up.”

“Now that we have a bigger facility we have room for a lot more children, and as a consequence, a lot more people in our community can be a part of our preschool.” Ms Shine, who was still the Director back in 2012, said the old facility was far out-grown, and she decided to lobby to the then local member, Troy Grant, for funding to build an improved facility.

The new centre includes one extra playroom than what the old one had, with three of these, as well as a large outdoor area. But the new addition, Ms Shine said, that was the most important is the Community Room. “Our Community Room offers speech therapy and occupational therapy, but we also use it for new mothers groups who have sessions with our early childhood nurse, and it is also used for Sunday school,” she said.

“This room brings so much community involvement with our preschool and I think it is the best thing that we have.” Ms Shine said the preschool would continue to fundraise so it could purchase new equipment and resources to fill its new facility. Educational programs will remain the same, but more children will now benefit.