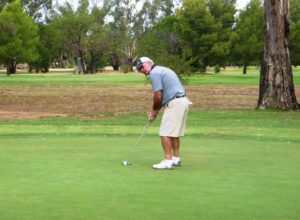 On Saturday the men’s comp was the Monthly Medal 18-Hole Stroke, sponsored by Grayson, Earl, French and M Haley. The A-Grade was won by Parkes visitor, McGlashan with a 69 nett off a scratch round of 72. Runner-up and medallist, was Barry Shine with 71 nett, who has stories aplenty about his score. The B-Grade saw a runaway win by  Josh Coulthurst, finishing with a nett 66. Close behind was Garry Collits with an almost as good nett 67.

The C-Grade did well, where Robert Scott was the winner on 74 nett. Runner-up on count back, with a score of 75 nett, was Bruce Squires who edged out Bede Tooth with a better back-9.

Sunday’s Stableford Medley had a small field due to Pennants duties and the weather. Peter Grayson had the best score with 35 points, but unfortunately there were no runner-up, ball sweep or any NTP’s prizes. Sunday was the first round of the CWDGA Pennants 2019, resulting in a day of mixed results for our teams, who each played a Parkes team.

The Div 1 team had a solid win, defeating Parkes 4/1. S Betland and S Sallaway had big wins. The Div 2 team lost to Parkes 4/1, where Kim Herbert was a shining light with a win on the 20th-hole.