You are here: Home / Sports / Misfits Coming Together Well In Back To Back Bid 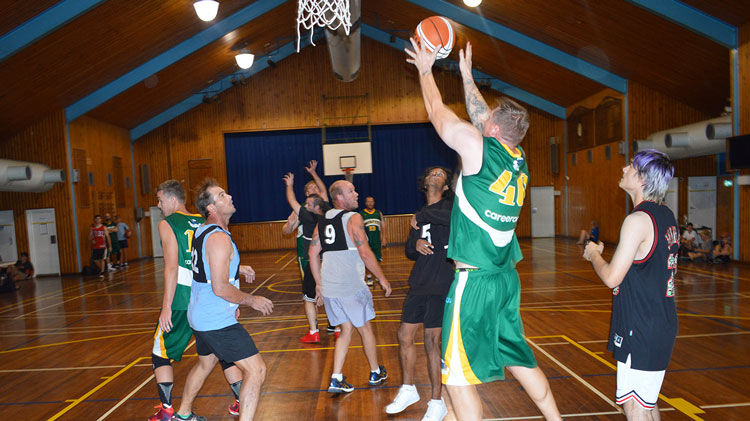 REBOUND HOUND: Grant King dominates the paint with another rebound for Misfits in a dominant display by the defending champs as Mark Stirling watches on and Ben Mulley (9) runs back to defend.

Anyone who knows sport realises that a number of things have to go your way to successfully defend the mountain top and local top grade basketball side, Misfits, look set to do it again.

In a dominant display against new side Maybe Babies, Misfits lead by crafty number 7 Blair Thomas with 27 points won 82-20 at Forbes High School last week. With the competition only just beginning it is still early days and while Misfits have chemistry and history on their side there is enough talent in the Maybe Babies line up for a competitive tilt at the title.

With the competition only a few rounds old, Misfits sit atop the leaderboard unbeaten with Flint Tropics, who even at this early stage look to be a real shout for the title and Misfits’ biggest threat.

Maybe Babies were gallant with strong efforts from Grant Hodge and Adam Maynard while Ben Mulley hustled all night in a beaten side. Despite the loss though, the signs are there this side will cause some problems especially with such a speedy back court of Matthew Corliss and Adam Molloy.

As for Misfits though it remains one week at a time as they attempt to climb the mountain for the second year in succession.

Misfits Shannon Crowley said that the new competition with six teams meant there were no “easy games”.

“Maybe Babies fought for every possession and hassled us all game,” he said.

“On any night the result could’ve been different but we are just glad we have picked up the W.”