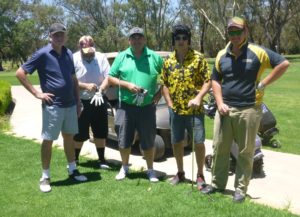 The ball sweep went to 71 nett on count back. The visitors included Ray Beacroft (The Grange), making a welcome return, and Marty Woods (Orange). The NTP’s went to: 1st – A Dukes, 18th – A Davies. Alf managed three 2’s in total. The golfing gods helped Andrew House,
who chipped in twice and later holed a monster putt on the 16th,to get a good score. There was also a magician golfer playing the 7th hole. He had three tee shots but finished the hole with a birdie 4, because his first two tee shots struck the wires, so he got to replay them.

The Sunday Stableford Medley field was small due to the hot weather. Ray Taylor won the day with 35 points. There was no ball sweep, but the NTP’s were snaffled easily. The 9th went to B Carpenter (for the 2nd week running), while the 18th went to R Taylor. The condition of the course has improved over recent months and held its own through the summer. We will be trialling a “Play the Lie” rule for the month of February, to be applied to all men’s competitions, and likely for the Sunday Stableford Medley. The Sixes competition will retain its ‘Preferred Lie through the Green’ rule, while the ladies and vets will make their own ruling.

The Playoff for the AAA Cup was completed on Sunday. This is a points competition held throughout the year with points awarded to place-getters for each of the main competition games. Andrew Dukes finished in top spot showing the value of consistently high performances with a sprinkling of wins. The top- 12 points scorers competed in an 18-hole playoff. Phil Maher was 3rd on count back from
Lee Grierson, Peter Dawson finished in 2nd spot (bridesmaid for the second year), and Andrew Dukes took top honours. The prize for the Best Overall Points Average went to Steven Betland (110.38) ahead of Andrew Dukes (103.31). And the prize for the Most Games Played went to Scott Kirkman (33) ahead of Bruce Squires (31).