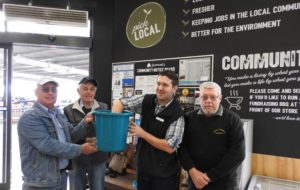 Whether you shop at Woolworths or Bernardi’s, it’s likely you will have come across the blokes from the local Men’s Shed during the month of July as they sold raffle tickets to raise money for their new Shed. Woolworths and Bernardi’s each donated a $250 open order as first prize, and Flannery’s Pharmacy donated a $100 second prize for each raffle.

Overall, $1920 was raised for the new Men’s Shed, and president Norm Haley said he was elated by the community’s support. “We wish to thank the members of the community for their support. We’re also grateful to Woolworths and Bernardi’s. We know most people shop at both supermarkets, so we wanted to hold two raffles.

“We only have one big fundraising month a year. The public are pretty generous to us and we accept that,” he said. The Woolworths raffle draw took place on Thursday last week, with Tania Cole of Woollies and Debbie Prior of Flannery’s Pharmacy on hand for the draw. The $250 open order went to David Nock, and the $100 went to Len Lavers.

The Bernardi’s raffle draw was held on Friday at the supermarket with store manager Selwyn Bale. Vickie Duffill was the lucky first prize winner, and Brian Spice was awarded the second prize from Flannery’s. The Forbes Men’s Shed is located at the Showgrounds, and welcomes men of all ages and walks of life, even if it’s just for a yarn and a cuppa.