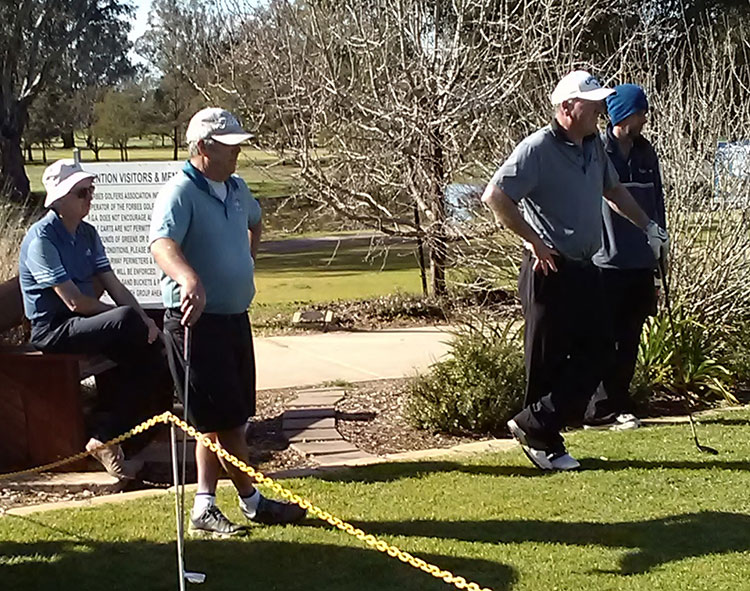 Alf Davies, Craig Simmons, Niel Duncan and George Falvey enjoy the sun as they wait for their tee off.

The Saturday Men’s event was the August Monthly Medal, sponsored by Bernardi’s Marketplace, and strongly contested by 96 players.

The A-Grade finished with John Betland the Medal winner, on count back from Brian Everest when both finished on 72 nett. This reversed the finishing order for last month’s Medal. The B-Grade saw two visiting golfers fill the top two spots, but the Medal went to club member Ted Morgan on 72 nett. The B-Grade prize winner was John Grogan from Sugar Valley with a nett 70, ahead of runner-up Hugh Graham from Dubbo on 71.

The C-Grade had lower scores but also a tight finish. Troy Howe won the medal on count back from Matthew Duff who managed some good play on the par.

The visitors included John Grogan and Hugh Graham, as well as Stephen Grant from Murrumbidgee, Jono Baker from Caragabal, Bob Hansen from Shoalhaven Heads, Trevor Cooper, and Nigel Davies from Caragabal. They all enjoyed their game.

The Trundle and Cowra Opens are still going ahead this weekend and the Legends Pro-Am, is scheduled for 23 October. The Kristie Carpenter Memorial Trophy has been rescheduled for 31 October.