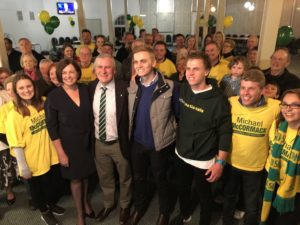 The Nationals’ Federal Member for Riverina, Michael McCormack, has thanked the people of the Riverina and Central West for endorsing him to serve as their representative in Canberra for a third term.

“I am humbled the people of the Riverina have placed their trust in me once more to be their strong advocate in Canberra,” Mr McCormack said.

“With the Riverina’s new boundaries, many people in the electorate have put their faith in me for the first time to deliver for them as their Federal Member. “I am delighted with the result in Riverina and I will continue to be a strong advocate for the region in the next Parliament.”

Mr McCormack also paid tribute to the hard-working volunteers who worked on his successful campaign, as well as the other candidates who stood for Riverina for a hard-fought and respectful contest. “I want to thank my volunteers who gave up countless hours of their time to stand out in the cold helping me at polling booths, both at pre-poll and on election day,” Mr McCormack said.

“The other candidates in the race for Riverina have generated a genuine contest of ideas during the eight-week election campaign and our communities are stronger for having such passionate people wanting to represent them.”

While it will still be a number of days before the nationwide result is finalised, Mr McCormack said earlier this week, the election had delivered a resounding result for The Nationals elsewhere in the country. “Though Capricornia and Flynn in Queensland are still too close to call, the people of regional Australia have overwhelmingly endorsed The Nationals as the party to represent the needs and interests of their communities,” Mr McCormack said.

“I want to congratulate the Deputy Prime Minister, Barnaby Joyce, on a toughly fought and successful campaign in New England, as well as Damian Drum in Murray, who pulled off a spirited victory in a tight three-cornered contest.”

The MP was in Forbes during the election campaign to announce funding for the Wiradjuri Dreaming Centre as part of the Safer Streets program. Two closed-circuit television cameras will be installed at the centre at a cost of $13,600.