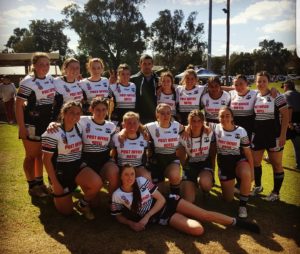 The Forbes Magpies League Tag side won in spectacular fashion last Saturday against twin town rivals the Parkes Spacecats. With the Spacecats in top position on the Group XI leader board, the Magpies went in as the underdogs, but came out with a will to win. They also became the talk of the day defeating Parkes 16-10 after a half-time lead of 16 – 0.

“It was the best possible way to finish our regular season,” said Captain, Amy Townsend. “The girls put everything into action that we have been working on all year. There is nothing better than beating Parkes at home!

“We will take a lot of confidence from our performance this weekend and look to continue our form into the finals.”

The next game for the girls is a home semi-final this Saturday, playing the Parkes Spacecats again. “We are looking to put in another ground breaking performance,” said the Captain.

It was a spectacular day all round for the Magpies with all four grades taking home wins. The Under 18s won 26-6; Reggies won 30-14 and First Grade Lead won 22-20. First Grade will also play the Parkes Spacemen tomorrow. Gates will open at 10:00am with the Ladies League Tag game at 10:30am.