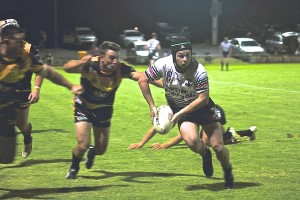 The Forbes Magpies have turned their attention to the annual Brendon Collits Memorial Cup after a solid outing at the West Wyalong knock-out competition last weekend.

In 2013 former Magpies player Collits was tragically killed in a car accident while on his way to training, and since the incident, the fixture has been played in his memory.

They will play Bathurst in the game, and should enter it with plenty of confidence after almost taking the West Wyalong competition. After losing to the Young Cherrypickers 22-12 last Friday night, they beat the Queanbeyan Kangaroos 8-6, before losing to Gundagai 14-10 in extra time after the
scores were locked at 10-a-piece at fulltime.

Gundagai went on to win the grand final in the next match. Magpies President Greg Grogan said the side played well in its first hit-out of the year.

“They played very well considering they’re only a young side,” he said. “We had a few injuries, but the competition [Group 11] doesn’t start until the end of
April, so they should be alright.” “It was only a trial though. The competition-
it’s a long year, and anything can happen.” Jake Grace is captaining and coaching the side this year.

The side will field a very strong forward pack this year, with Grace joined by Zack Merritt, Ben Robinson, Ben McGuire, and Ethan Gaffney. The backline is not too much more unformidable either, with Matt Roylance, Carl Johnston, Mitch Bourke, Mitch Andrews and Patrick Murphy steering the team
around the paddock.

Grogan said the club would look at moving forward from a great year last year, when it won the Club of the Year award for having all four grades represented in the semi finals. “Everybody made the semis which was a great achievement,” he said.

“Hopefully we can improve in the first grade side so we last a bit longer in the
finals. But the main thing is to improve and keep competitive. That’s what the supporters want to see.”