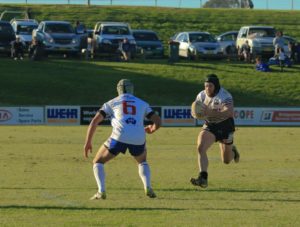 With the second half of the 2016 Group 11 season already upon us, the Forbes Magpies will look at importing their discipline and concentration, after losing two games that could easily have been won.

With round seven yet to be completed, the Magpies currently sit in fourth position on the ladder, however with two extra wins, they could easily have found themselves in outright second position.

These two wins could have come from their matches against Parkes last week, and their match against Nyngan on May 29. They turned on a terrible first half against Nyngan, trailing 30-10 at half time, but came back in the second stanza to lead 32-30. But they then conceded a try in the dying seconds to lose 36-32.

It was the opposite story against Parkes, getting off to a blinding start to lead 18-0, before letting go of their grip and losing 28- 22. Magpies President Greg Grogan said the players would be working their consistency in games. “I think Coach Jake Grace will be looking at their attitude and discipline so the boys can play for the full 80 minutes again,” he said.

“At the end of the pre-season we expected to be in the top three or top four, which is where we are at the moment, but we could easily be in the top two.” Grogan said the rest this weekend was good to allow injured players, including captain/coach Grace, the chance to recover before taking the field again against Dubbo Westside in round eight on June 26.

While Westside hasn’t had the greatest season to date, Grogan said it would be important for the Magpies not to get too complacent. He added that his side would be boosted by the return of more players from injury, however.