Home » Magpies Get Off To Blinding Start 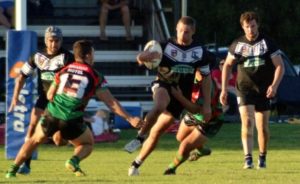 The Forbes Magpies lead the Country Rugby League Group 11 competition after the first round, after demolishing Dubbo Westside 52-22 at Spooner Oval last Sunday afternoon. Despite potentially being without two players for this Sunday’s clash against the Wellington Cowboys in Wellington, their big win would certainly have boosted their confidence.

Zack Merritt was unlucky in the 75th minute of the Westside clash, picking up
a groin injury in the dying stages of the match, and he will unlikely be available to face Wellington. The other injury was picked up by centre Mike Mitchell, who injured his ankle. It is unknown as to whether he will be able to take the field this Sunday.

Magpies President Greg Grogan said the injuries was the only low point for the Forbes team, which came out guns blazing in round one. “They scored some really good tries and came up with some good set plays, and they were able to run away with the game,” he said. “They were a bit scrappy in the first half, but they fixed that up and really got going in the second half, which is a great sign moving forward.”

Grogan said it would be important for the Magpies to stick to captain/coach Jake Grace’s game plans moving forward throughout the season. “We may be off to a good start and on top of the ladder already, but it’s only round one,” he said. “The players showed last weekend that when they stick to Grace’s game plans, they play much better. There was a period where they seemed to just follow the opposition a bit, but when they went back to the game plan, they played much better.”

Wellington was beaten convincingly by the Parkes Spacemen 38-18 last weekend, and this would hold Forbes as favourites for their match. Meanwhile, the Forbes Magpies womens league tag side also came away with a win last Sunday. The reserve grade side went down to
Westside in their clash, and the under 18s side fell short of their first win as well.