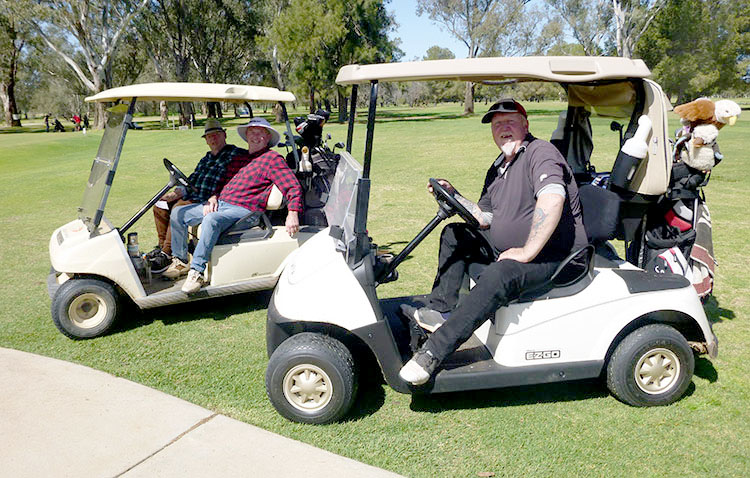 HAPPY GOLFERS: Denis Culley, Peter Tisdell and Rob Webb are all smiles after a sunny day.

On Saturday, the Men’s September Monthly Medal, sponsored by McFeeter’s Motor Museum, was contested by 96 players, some of whom produced magic golf in beautiful spring conditions.

The A-Grade was very tight, but eventually was won by Michael Wood with 67 nett, followed by Warwick Jennings from Nowra on 68 nett. The B-Grade saw an outstanding performance by Doug Churchill to score 64 nett, comfortably ahead of Barry Parker on 67 nett.

The C-Grade was where all the flash was made, with Liam Whitfield scoring 62 nett, from Ben Coles with 63 nett. Jack Dobell was unlucky to miss out with his 64 nett.

The ball sweep went to 71 nett on count back and distributed to 30 players. Too nu- merous to list, please check in the Pro Shop for your name. The NTP’s went to: 9th, J Dobell; 18th, S Betland. The ProShop Super Pin went to John Boyle, who got his ‘2’.

The visitors included Digit McAuliffe from Nelson Bay, Stuart Hayes and Stephen Grant from Murrumbidgee, and a group of travelling golfers Bob and Dan Hansen, Greg, Warwick, Paul and Pierre Jennings, and Tim and Chris O’Shea.

The 9th hole proved too much for all players in one group, where after a watery dunking the best score was a five.

The Sunday Medley numbers were bolstered by the travellers but had good club numbers. The winner was Ethel Coombs with 40 points on count back from Shirley Redfern.

The ball sweep went to 34 points, A Demidjuk and B Drabsch. Remember to still practice the social distancing, even in the ‘Golfie’.