You are here: Home / Articles / Local Lions Recognised For Contribution 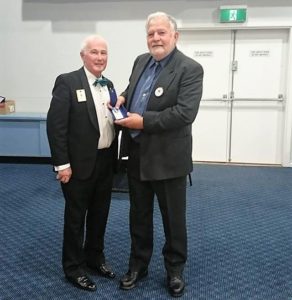 Peter Bright, member and past president of the Forbes Lions Club, was recognised for his contribution to the community at the 56th Annual Lions District 201N4 Changeover Dinner held in Wellington last Saturday. Before handing over to incoming District Governor Anne Jones OAM, District Governor, Roger Thomas presented the International Presidents Award to Peter for his work with the Forbes Flood Relief efforts last year. Peter was the coordinator of the assistance office at the HACC centre between October 2016 and January 2017.

During that time, the club assisted 47 families with a variety of Australian Lions Foundation vouchers including food, fuel, stock feed and fencing. The Australian Lions Foundation, to which every Lions Club in Australia contributes, specifically released funding for the Forbes and district flood event. Peter received the award from Chancellor Bob Corlew, International President, in recognition of his “Distinguished Leadership”.

Peter said he was stunned by the surprise presentation.

“Of course, it’s an honour and I’m pleased to receive it, but my belief is that it reflects on the whole club, not just me. I’m just the representative in this case.” “Being able to help that many local families the most rewarding thing I’ve done since leaving the police force years ago, and thanks must go to the Australian Lions Association and the Foundation for enabling us to support our local community.”

The Changeover dinner also saw the installation of the District Cabinet for the coming year. Three local Lions were also inducted
into positions on the District Cabinet. Neil Lambert will be the Peace Poster Chairman, Robyn Seberry the Australian Lions Drug Awareness chairperson and Gayle Williams the Environment chairperson.

The Forbes and District Lions Club have been operating in Forbes since 2006. Their direct annual support to local organisations exceeds $20,000 per year; and they provide immeasurable indirect support, like helping out at Vanfest, and the local show.

In addition to disaster relief, they have provided Hearing Loops in local primary schools, supported Ronald McDonald House, and ran the Drum Muster programme to help keep drums out of landfill. Some of their many other projects include the Youth of The Year Quest, and a Peace Poster Competition for Primary Schools. “Being a member of the Lions Club is an extremely rewarding experience,” said Peter Bright.

“We appreciate all the assistance we get from people who attend our functions and buy our food at BBQs, but we need people to put their hands up and make a commitment to a couple of days per month.” If you have one or two days a month free, and you’d like to know more, visit www.forbesanddistrict.nsw.lions.org.au or call President Ray Judge on 02 6852 2143.