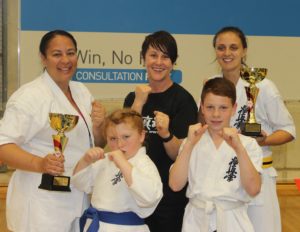 Four competitors from Central West Kyokushin Karate Club participated in the Kyokushin NSW Full Contact Championships in Sydney on Sunday 22nd May, winning two state titles in their divisions. Representing the juniors were Rebecca Withers from Forbes and Kye Herft from Parkes and in the adults, Parkes locals Renae Herft and Natalie Caruana.

Rebecca and Kye fought in the full-contact children’s division; however modifications on the day were an obstacle as the students were not prepared for the style of fighting. Both students displayed outstanding skill and most importantly, excellent sportsmanship on the day. Their Sensei and coach, Michelle Kable said; “although the change in fighting rules was a bit of a setback, we will be able to adapt our techniques and approach for the next tournament. Both Kye and Rebecca are a credit to our club, and I am very proud of their efforts, and that they had the courage to
have a go.”

In the adult’s division Renae Herft, a white belt, showed true spirit with the makings of a future Australian Champion; persevering through numerous fouled punches to the face to win her division and take home the NSW State Championship title. Renae’s sister, Natalie Caruana, a more experienced martial artist has also only started Kyokushin Karate this year and was well prepared for the full contact fights. Dropping 5kg in the last month to make her weight division Natalie was able to maintain her strength and dominated her opponent with snapping head kicks, punches and powerful leg kicks to also win her division and take home the title of NSW State Champion – watch this space for great things to come!

The club are now preparing for the Australian National Championships in August. Michelle said; “The karate club is growing stronger – we breed them tough out here in the bush. We’re very proud of the courage shown on the weekend, with all fighters exhibiting great karate and outstanding sportsmanship. We were very lucky to have great support for the awesome foursome.”