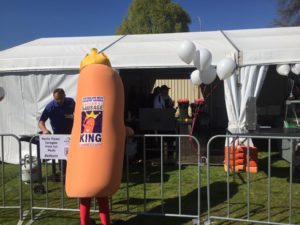 Shannon Birmingham, from Forbes Central Butchery, was crowned Central West Continental and Australian Lamb Sausage King for 2016 in Bathurst on the weekend. Shannon and his team travelled to Bathurst on the weekend to take part in the Sausage King & Best Butcher’s Burger Competition. The competition was run by the Australian Meat Industry Council, with competitors coming from all over the state to participate. In Shannon’s categories, Continental Sausages and the Australian Lamb category there were at least 50 competitors in each.

Shannon managed to win both sections and they have won the Central West division for the past four years,
over the five years that they have been attending. Shannon will be selling these sausages both in his store and also on his runs out to Parkes and around the Forbes area. He is still experimenting with some new and different
flavours and these include cheesebburger, wild tomato and pepper, hawaiian, lamb curry and many more. The meat that Shannon uses in his sausages is sourced from Breakout Meats, Cowra. It is great to have a win like this particularly when Forbes has been under so much stress with the floods.