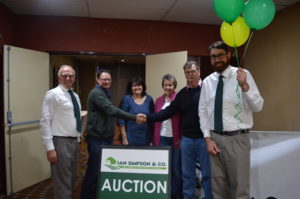 Ian Simpson & Co held their first auction as an independent agent at the Forbes Services Club last Friday. There were two rural and two residential properties on auction, with three of them sold under the hammer. Negotiations are continuing on the fourth. There were 14 registered bidders among more than 120 people in attendance.

The first residential property to sell was 28 York Street Forbes which went for
$420,000. The two rural properties were also sold. Urah at Condobolin was sold for $550,000 to a phone bidder, who is a farmer from Condobolin. Stockdale in Manildra sold for $520,000 to a family from Mullion Creek.

Ian Simpson said he was absolutely delighted with the result. “As this was our first auction under our new banner of Ian Simpson and Co, it was great to kick start our new business with such a great result. We ended up with all vendors and buyers extremely satisfied.”

One local vendor said he was very pleased with the personal approach of Ian Simpson and his staff, their level of professionalism and organisation levels were just fantastic.

Ian will hold another auction on 16th September at the Forbes Services Club for two rural properties, one from Cowra and one from Grenfell. On 4th October four properties will be auctioned; 3 residential and 1 rural at 6pm. Tomorrow there will be a furniture sale auction at 8 Clements Street at 11am.