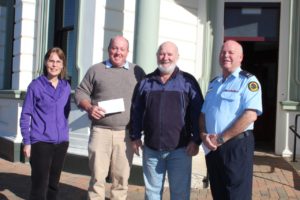 On Wednesday 14 June, Forbes and District Lions President Ray Judge visited the Town Hall to present cheques to two local organisations. Robert “Rocky” Walshaw from SES, and Andrew Rawsthorne from Forbes Shire Council, accepted cheques to the value of $5000 each on behalf of the SES and the Bedgerabong Community Flood Fund respectively.

The SES donation will be put towards the purchase of a heavy duty dual axle trailer which can be used for transporting sandbags during times of flood. The money donated to the Bedgerabong Community Flood Fund will be put into an account administered by the Forbes Shire Council and made available in times of floods and emergencies to cover the immediate costs for catering, fuel and electricity.

The local Lions Club in conjunction with the Australian Lions Foundation were quick to assist when the local area was inundat- ed in September 2016. Funds were made available initially to help those in need of assistance for Food and Household goods with a second round of vouchers for Fuel, Fodder and Fencing. Over $56,000 was distributed to 51 flood affected families to aid in their recovery while waiting for government disaster funding to become available.

Lion Peter Bright was the local coordinator of the Lions Flood Relief and manned the office at the HACC centre with the assistance of other Lions members for several months.

The cheques given to the two local organisations are residual money from the account which was set up to handle donations from individuals and groups in the days following the flooding. One of these generous individuals was local farmer Brad Shephard who, while flood affected himself, took the time to produce a Flood Calendar, the proceeds of which he shared between the Condobolin and Forbes Lions Clubs for their Flood Relief work.