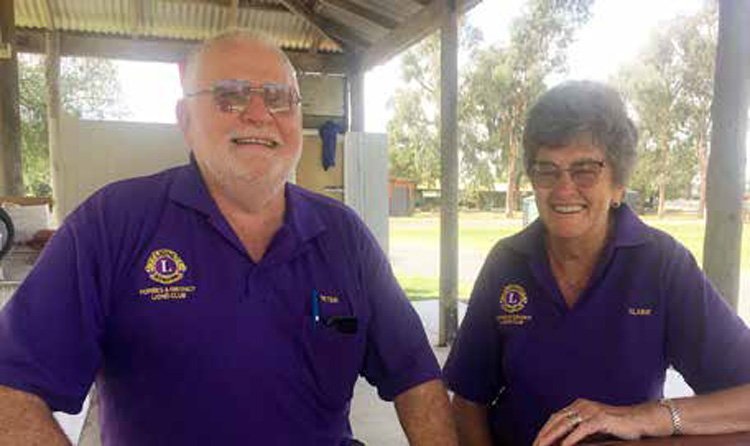 LIONS AWARENESS DAY: Peter and Elaine Bright of Forbes Lions Club at Lions Park for the launch of Lions Aware-ness Day tomorrow March 5. The club is inviting all members of the community to Bunnings from 9am-3pm for a barbeque and meet and greet as they look for new members and volunteers

Forbes Lions Club will be holding a barbeque at Bunnings Forbes tomorrow, 5 March from 9am to celebrate Lions Awareness Day.

With over 25,000 members, Lions Australia is Australia’s largest service organisation. But there’s much more to them than fundraising barbeques according to members Peter and Elaine Bright.

“We help a range of other community groups with their blue-chip events whether it be volunteering or loaning of equipment,” said Peter, who has been involved since the club reformed in Forbes in August 2008 after running from 1962 – 2001.

For Peter and Elaine, the Club, like many in the bush, survives on local volunteers and as the current crop retire or take a backseat, the importance of new members joining and keeping such groups alive is just as big a focus.

“Hopefully this Lions Awareness Day we can attract some new and younger members and we invite everyone to come along for a meet and greet,” he said.

“Forbes Lions are involved in a number of projects within the community including RDA and our Youth of the Year competition among other things,” said Peter.

Lions jam-packed calendar in 2022 also includes the famous Drum Muster in November which is always a highlight, according to Peter’s wife and fellow member, Elaine.

“It is one of our bigger events each year and always popular,” she said. “We are hoping this year things start returning to normal.”

Forbes Lions Club BBQ will be held at Bunnings Forbes from 9am – 3pm on Friday, 5 March.