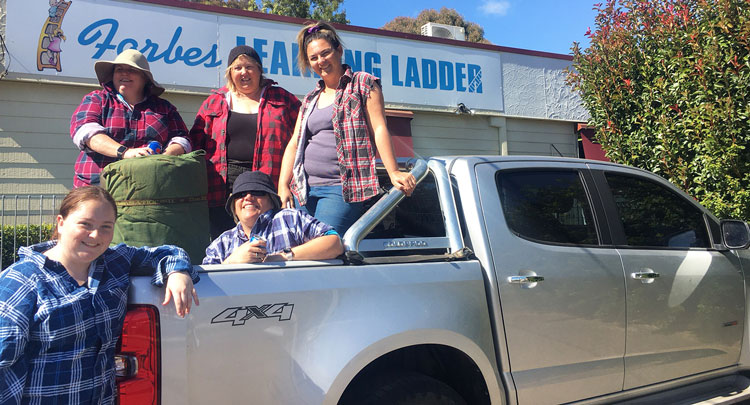 GET YOUR BOGAN ON: Bogan Shazza’s from Forbes Learning Ladder are ready for the 2021 Australia’s Biggest Bogan Festival at Bedgerabong Racecourse on June 11-13.

Forbes Learning Ladder and Bedgerabong Public School will both be recipients of donations this year from Australia’s Biggest Bogan Festival according to organisers.

Learning Ladder will receive a charitable donation while Bedgerabong Public School will receive all proceeds from cans consumed at the event.

“We really want to mix it up each year and help different organisations, schools or charities where we can,” said organiser Luke Acheson.

“In 2019 the beneficiaries were Currajong Disability Services who were located in the Parkes Shire so this time it was Forbes’ turn,” he said. “We want to put back into our local communities that support us and sponsor us too.”

“We are always looking for more sponsors and supporters,” said Luke.

“We have Pauly setting thong smacking records to go with our golden thong trophy from Cahills for Biggest Bogan, lawnmower racing, mullet haircuts, sausage sandwich eating comps and a bogan wedding – so watch this space!”

“Tickets are moving faster than COVID-19 at a footy game so don’t muck around and avoid disappointment – save that for your parents!”

Chris Franklin, Noll Brothers plus special guest, Hype Duo, Domenic O’Kiernan and Benny Bogan will also be back after appearing in 2019 as will Australia’s Biggest Bogan Ryan ‘Bogan’ Edwards.

Tickets can be purchased at www.eventbrite.com.au