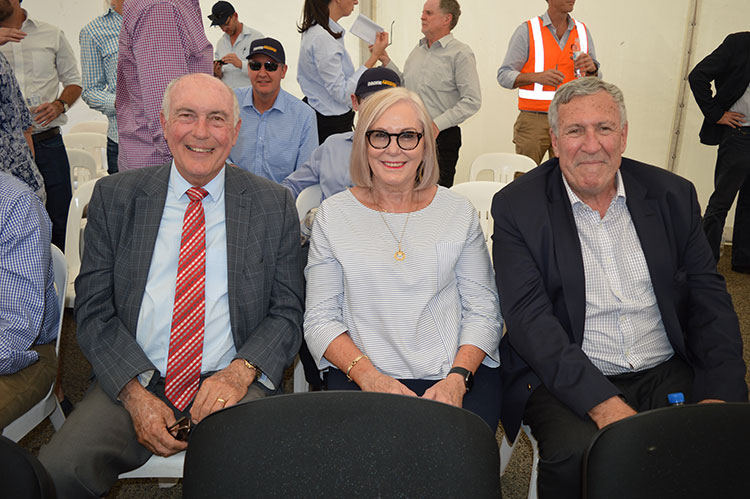 ARTC Board Chairman, Warren Truss with Forbes Mayor Phyllis Miller and former NSW Minister for Roads, Maritime and Freight at the official opening of the Parkes Logistics Terminal last week.

A good news story for the drought-gripped Central West was the official opening of the $35 million Pacific National Logistics Terminal in Parkes last week.

The very first double-stacked freight train left the new facility, the largest logistics terminal in NSW, last month to arrive in Perth three days later. The terminal will not only enhance productivity for Inland Rail, but will also bring an additional 90 jobs based at the terminal.

Deputy Prime Minister and Minister for Infrastructure, Transport and Regional Development Michael McCormack said at the opening: “This is a game-changer for Australian freight.”

“Construction started on the Parkes to Narromine leg of Inland Rail almost one year ago and has already proven a boom for local small businesses while creating almost 900 new jobs, 370 of which are local people.”

NSW Minister for Regional Transport and Roads Paul Toole acknowledged the presence of Forbes Mayor Phyllis Miller saying: “This is more than just Parkes. It is a regional product that would go beyond council boundaries and beyond Forbes to reach more communities.”

“Pacific National’s investment in Parkes demonstrates that regional NSW is ripe for industry investment. We look forward to seeing more industries get on board as Inland Rail rolls out across our State.”

The Parkes Logistics Terminal will be moving 50,000 shipping containers of freight from this terminal this year, going up to 100,000 next year and eventually 450,000.

The unique location of Parkes at the intersection of the East-West line connecting Sydney and Perth and the Newell Highway will put 80% of Australia’s population in reach of the Parkes Terminal overnight.