Home » Lachlan Valley Caravan Club Roves To SA And Back 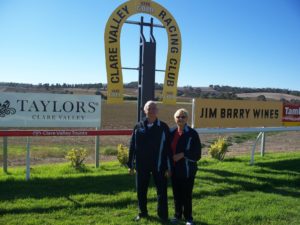 A large contingent of 13 caravans set off for our three-week roving rally, led by our Tour Director John Apps and his wife Di, to all meet for our first night camp at Ariah Park. The next day saw all set off travelling to Griffith and Jerilderie and Conargo. Day three saw us drive through Deniliquin and crossing the Murray River into Victoria at Barham for a morning rest. Kerang was our next stop for lunch and then we drove to the town of Birchip which is famous for it’s vanilla slice at the bakery. We then reached the border of South Australia and after a fruit fly check camped that night at Parilla.

Heading off we went to Tailem Bend, Murray Bridge and through the towns of Hahndorf and Crafers to our five-night stay at the Belair National Caravan Park in the Adelaide Hills.

On leaving we were all directed out of Adelaide by our leaders and all safely made it to Dublin. Most drivers missed the bakery there and headed off to Ardrossan. This was the start of the Yorke Pennisula ,which is a wealthy grain producing area. We stayed at the caravan park at Yorketown and we found this a very friendly spot. Next stop was at the Clare Racecourse in the Clare Valley- famous for its wine and produce. At Seven Hills we visited the old Jesuits winery and church with its crypt. Leaving the Clare Valley on Anzac Day, the group held their own private service at the War Memorial at Gladstone, camping that night at Hawker in the Flinders Ranges. The next day we all arrived at Wilpena Pound. This is a beautiful area where walks and climbing into the pound are enjoyed, as well as driving through Brachina Gorge to Blinman and Parachilna. Lots of natural beauty was seen.

On leaving here it was the start of a homeward journey, travelling to Peterborough and Burra Morgan, and finishing at the Riverland in South Australia . The next stop was Hay, and then Forbes for a meal with some of our Club members and home after a long and very enjoyable journey.