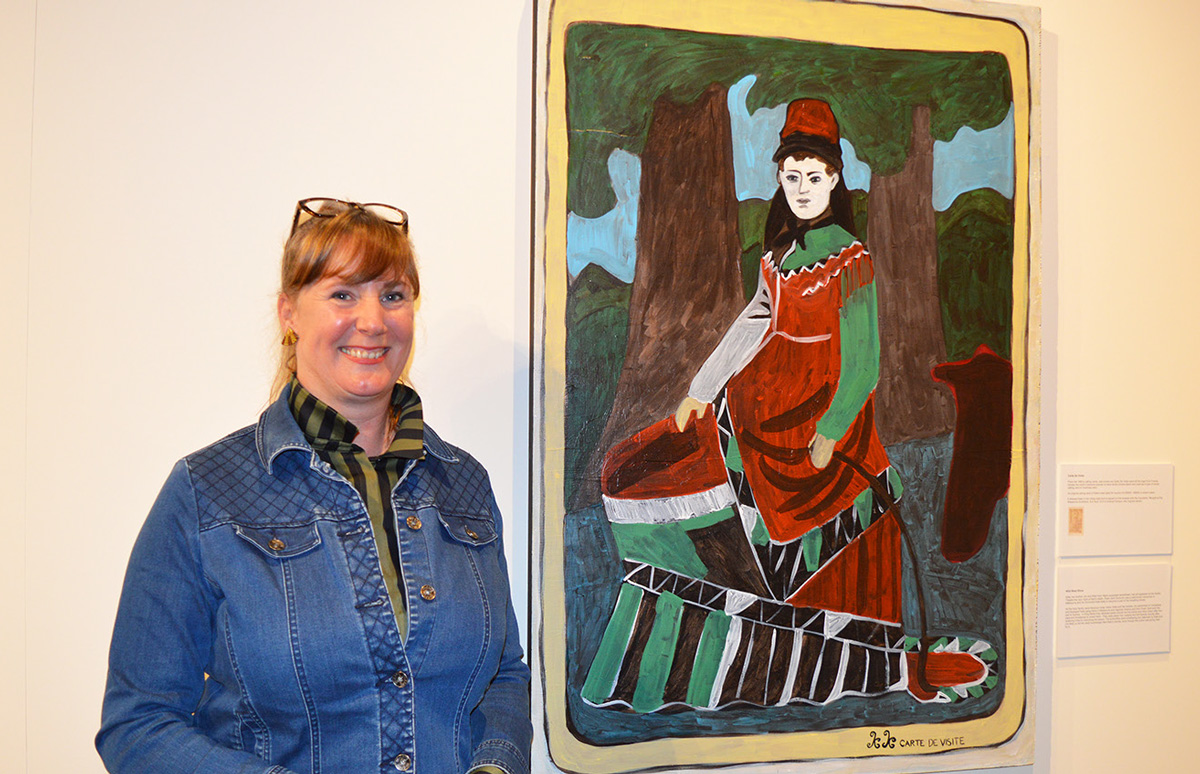 Rebecca Wilson with her favourite painting of Kate called Carte De Visite. Calling cards, or Carte De Visite, were all the rage from France from the 1860s. An original calling card of Kate’s was listed for auction for $5,000 – $8,000 in recent years, and showed Kate in her riding habit. (The Kate Kelly Exhibition is on at the Coventry Room until 6th August.)

Many people might only know her as the little sister of Australia’s infamous bushranger Ned Kelly, but Kate Kelly was incredibly famous in her day.

“Kate was absolutely Kardashian famous! Everybody knew who Kate Kelly was and by 1882 she had her own wax replica on display at the wax works that were quite popular in those days.”

Artist and former Forbes resident Rebecca Wilson entertained the audience with some incredible stories about Kate’s life at the opening of her exhibition in Parkes last Friday.

Rebecca spent ten years researching the life of Kate after a conversation over Christmas lunch. “I was thinking why don’t I know these stories, and that set me off on an investigation of over 10 years.”

As a painter, she was drawn to Kate’s story because of the Forbes connection, but also because it was such a visual story. “I wanted to paint her story, but first had to do research.”

Rebecca discovered a woman who was extremely loyal to her family and friends. “She was feisty, adventurous, brave, intelligent, and a highly skilled horse woman. It was important for me that more people learn about Kate’s story and how she was involved in a very important part of Australian history.”

Rebecca discovered so many impressive things about Kate and all the adversaries she had to deal with until the tragedy of her death in Forbes. She was only 14 or 15 when she was riding through the bush as a decoy for the Kelly gang, delivering messages, getting supplies and information to help the gang stay at large. She ended up witnessing the Glenrowan siege in 1880 when her brother and two friends were killed and Ned was captured.

She campaigned and raised 30,000 signatures to try and spare Ned’s life and even met with the Governor when she was only 17. It was a showman called Flashjack Donovan who contributed to her fame when he convinced Kate and her brother Jim to tour with him across regional Victoria, South Australia, and up to Sydney. Thousands attended their performances, but the police could not stand it so they shut them down.

Eventually the fame and ridicule she received in the press, led to her wanting to escape Victoria, and she ended up in Forbes at age 22 under the alias of Ada Hennessey in 1885 and worked as a domestic servant. She married, had six children and was found dead in the lagoon on the outskirts of Forbes at the age of 35, perhaps suffering from peri-natal depression.

Rebecca not only created a beautiful cohesive body of work about Kate, but also wrote a book telling her story. “The incredible and amazing story of Kate Kelly is a story you can’t not know as it has a lot of relevance for us now.

“In a way our society has changed, but there are still many of those fundamental things that haven’t changed. We are still struggling for more rights and recognition for women, there’s still poverty, and a class structure.”

Rebecca said while she was doing the research she had a sense of real gratitude to all the women who have gone before us. “They’ve made my life a lot easier and we should not forget that as they worked really hard. And I hope our modern generation will be leaving some kind of legacy and be improving things for the next generation too.”