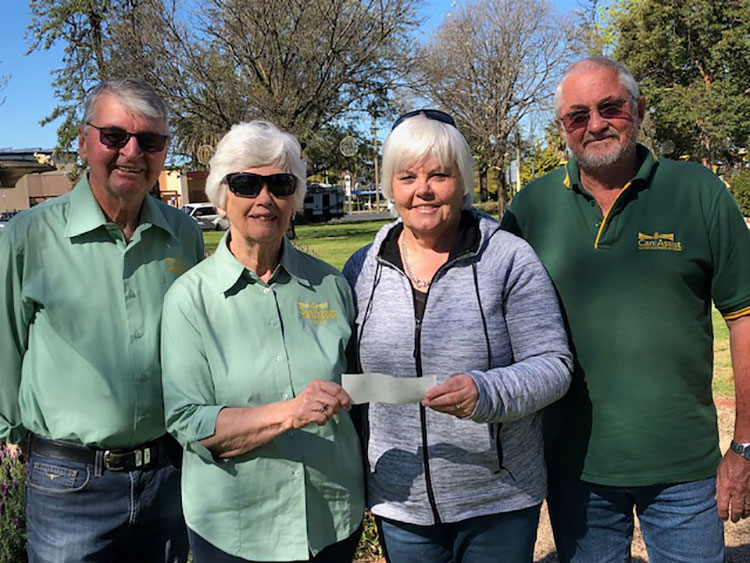 COVID-19 has prevented CanAssist groups from raising funds this year, so any donations have been welcomed with immense gratitude. Due to restrictions, the CanAssist groups in Parkes and Forbes were unable to run their normal fundraising  events.

Forbes CWA Evening Branch President, Karen Wright who works with cancer patients in both Forbes and Parkes, saw the benefit of her patients wearing masks and so began making some to distribute to them.

“Initially, the idea was to give patients masks, but then staff at Parkes and Forbes Hospitals asked if they could purchase them and it snowballed from there,” explained Karen. Forbes CWA Evening Branch members and other volunteers got together and formed a working bee over a weekend to meet the demand.

Karen said, “It was a community effort as some ladies donated material, while others cut out the patterns, and those with sewing skills spent a few days sewing to make the masks.”

The number of masks made is not known as many were given away before people asked to purchase them.

When it came time for the money raised from the sale of the masks to be distributed Forbes CWA Evening Branch decided that it was fitting that the proceeds be divided equally between both Parkes and Forbes CanAssist groups.

Mr John Schrader, President of the Forbes CanAssist said they were very appreciative of the $650 donation as did the representative of the Parkes group. “Funds that CanAssist raise is all used to support locals in their cancer battles,” he said. “None of it goes to pay for administration or head office or anywhere else. It all stays in the local community to support locals.”

All CanAssist money allows these dedicated workers to contribute towards trans- porting patients to appointments, their medications and chemist bills. Sometimes they assist clients with vehicle registrations, mechanical repairs, or even new tyres so people can travel to out of town appointments safely and on occasions contribute to some accommodation and other practical things.

With so many changes this year, it is inspiring to see how community groups and organisations in Forbes have adapted, particularly the Forbes CWA, with their ongoing efforts to better support so many in the Forbes community.