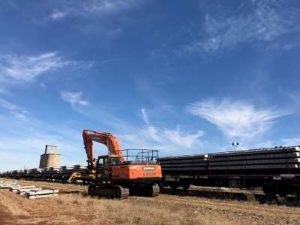 Economic benefits of the Inland Rail project are starting to roll in for the production and transport sectors.

Twenty new jobs were created at Rocla’s Braemar concrete sleeper plant in Mittagong in the Southern Highlands after the company was awarded a $20 million contract to produce 200,000 sleepers for the first stage of the project in NSW.

“The 200,000 concrete sleepers required for the Parkes to Narromine section of Inland Rail is the first of 1.5 million that will be required to build the full 1,700km length of the Inland Rail from Brisbane to Melbourne, opening a pipeline of further opportunities for Australian suppliers,” said Inland Rail Program Delivery Director Simon Thomas.

“The track between Parkes and Narromine will have Whyalla steel rail, Mittagong concrete sleepers and other material contracts from all over Australia.”

Rail company, Pacific National is also benefiting by making the first delivery of sleepers to Peak Hill last month. Over the next six months, Pacific National will run a train once a week from Mittagong to Peak Hill carrying around 9,000 concrete sleepers each trip. “When it comes to hauling bulk freight, rail is the safest, most efficient and environmentally-friendly mode of transport,” said Pacific National President of Freight Andrew Adam.